Madame Kapuscinska has produced over 80tracks and written way over 200 songs, with DDK varying from a wide range of genres, some of which are now placed in feature films. She has organised her own performances alongside DDK over the years and has performed at Icon Hotel, raised money for Keech Cottage, Haiti, Fringe Festival, Venus TV, Ben TV, The Performers Corner, Great Orchestra Charity, LUR live radio, Local Community Festivals, The Comedy Club, TropicalFm, BBC three Counties Radio, Luton Carnival Arts, Diverse FM, Hat Factory, The Forum and many more. 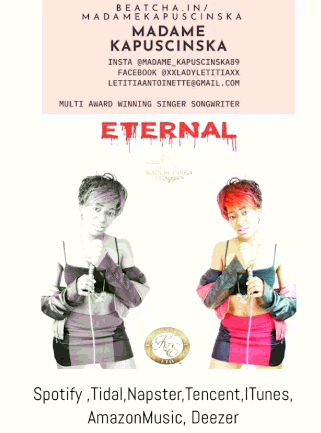 Official Love Letter starts with a piece of mellow music and a ballad verse, and then the music
progresses with a fast pacing rap verse. The pattern repeats until the song finishes giving it variety and uniqueness. Madame Kapuscinska’s vocals are versatile, powerful, confident and hypnotising that the listener will enjoy hearing the music. The lyrics are flawless and uplifting. An unusual mix nobody dares to experiment with; Official Love Letter is created with rap and ballad genre. And she has done an excellent job mixing many music genres into one song smoothly. Follow her in Instagram, Facebook.

Do you have a new hit track that you believe in? We use our brand power and leverage of a major artist to advance your career like no other. Capture their fan base while expanding your own and promoting your single to a wider audience.

Back to Top
Close